My Cup Crusade (and Her Bag Dream)

The building may or may not be more structurally sound than pictured. Depends on how much capital investment my gofundme account builds up.

When I grow up, I’m going to have a cafe called Cuppa. Everything will be served in cups. Cups and spoons, that will be my entire inventory of serving accouterments.

There will be no bowls, no plates, no saucers. Just cups. All of the menu items will be cup-friendly.

This is my dream: a world in which everything can be eaten with a spoon.

Also, cups and spoons are a lot more fun to wash than forks and giant plates. Who’s with me?

My all-of-the-sudden-she-is-five-years-old Marganit also has a dream for when she grows up. She told her preschool teacher on Monday a theme that she has been repeating to us for a while. “When I grow, I want to be a bagger,” she says. And, second to that: “a scientist.”

She’ll be a good bagger, too. She loves to put things in bags. Bags. Everywhere. Bags are her cups.

I should start gearing her up for her career field with specially designed Tetris tests. If my cup dream can’t come true, the least I can do is make my daughter’s bagger dream come true.

A nighttime bag packed with must-haves for midnight awakenings: a little notepad, a bouncy ball, a stethoscope (real), a cheap plastic slinky, and some other junk that cannot be easily identified.

The Other Thing That Roosters Do

Bernie the Rooster doing what roosters do.

“MOM!” two kids came to the sliding glass door, screaming and out of breath. “MOM MOM MOM! The rooster, the rooster!”

“What? What is happening?”

“YEAH! MOM! WHAT SHOULD WE DO?” echoed her little sister, Shirley.

“It’s okay,” I told them. “That’s what roosters are supposed to do. That’s how they make baby chickens.”

They both held puzzled looks for a moment, and then Bernadette checked in: “So he isn’t being bad?”

Bernadette continued, “So is he being good?”

Uhh. “He’s just being a chicken. That’s what chickens do.”

“Oh, okay.” Bernadette said. She closed the sliding glass door and she and Shirley ran back toward the yard. “GOOD JOB, ROOSTER! GOOD WORK, ROOSTER!” I heard them shouting. “GO BERNIE GO!”

We Both Like to Roll in the Mud and Neither of Us Enjoy Bacon, Thus We Are Just the Same

When I was a kid, I used to beg my parents incessantly to play board games with me. If I nagged and whined enough, or got sick, they would give in for a game or two. I couldn’t understand why they weren’t excited about board games. Were they just too busy?

Now I am the parent. I have two kids who whine and nag me to play board games. Something odd happened on the day my firstborn arrived: I now loathe board games. I hate them. I despise them. Even the quick, easy ones make me cringe. “Just one more game of Sneaky Squirrel, Mom? Please? PLEASE PLEASE PLEASE?”

Dumples’ favorite game is Super Why. If you’ve never heard of Super Why, then you certainly have never owned a toddler in recent history. Super Why is a PBS show about reading, superheroes, and fairytales. Dumples wants to BE Super Why. Whose real name is Whyatt. Just so you know.

I cracked. Just one time, I said. Because, you know, I’m super BUSY. Just like my parents were when I was four.

Dumples set up the game board, the spinner, the playing cards, the game pieces. She grabbed the Whyatt token. “I’m going to be Super Why!” she said. Of course she was. “And Mom, you are most like Alpha Pig so you can be Alpha Pig.”

Alpha Pig: my brother from another mother.

I think I’ve figured out why I no longer enjoy board games.

Things You Can’t Sell on Etsy

Today’s lesson: you do not have to join, read, or “pin” Pinterest to fail at it. I can create my own Pinterest fails WITHOUT ANY ASSISTANCE FROM PINTEREST.

It was my first time using the hot glue gun on a project since our popsicle picture frame mishap. Am I the only one who cannot control the thin trail of hot gun glue in spiderweb patterns that links all of the projects together?

Dumples dons a chicken-diaper barrette (Chicken says it’s not a chicken-diaper but a robin orange-breast) and Chickie sports a lamp barrette. For reasons I cannot explain here in order to maintain our internet anonymity, this is her seven-year-old idea of the ultimate meta.

Now I’m not a really big gun advocate. I don’t keep squirt guns in my house, for instance. But the glue gun seems to really make things stick together, and I have a feeling these barrettes are going to be passed down to my children’s children’s children. So from now on, when our pediatrician asks me if we keep guns in the house, I will proudly inform her that yes, we do, and we use it all the time for our best Pinterest fails ever.

Tagged chicken diaper, i defy you to fail as hard as i do, that's so meta

Chickie wrote a (non-fiction) story called “My Tooth.” We transferred it to Shutterfly and yesterday we received our book in the mail.

Chicken and Dumples had a glorious time pawing through it, and then making up new stories within the theme of gory tooth loss.

Dumples’ storylines target the “gross-out” factor. The louder she could make her seven-year-old big sister scream, “EW,” the bigger the triumph of storytelling.

“And the tooth came out and there was BLOOD everywhere,” I heard Dumples proclaim while I flipped the pages of a magazine from the sofa.

“EW!” Chicken replied, egging her on.

“And the BLOOD was so much that it was covering her and she was all RED with BLOOD.”

Sensing her sister’s genuine disgust, Dumples changed her plot line. “But it wasn’t really blood.” In an ominous, hushed tone, she said: “It was actually red marker. And…it wasn’t washable.” 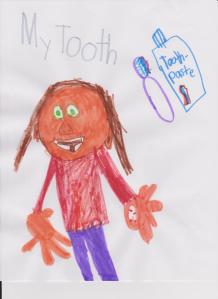 It Was Such a Cute Little Tushie

Chickie turned seven years old today, which means I’ve been a mother for seven years. I think I’m totally getting this parenting thing now. Upon heading out for a small celebration with a few of her friends, she warned me in her most stern seven-year-old voice:

“Now remember, Mom. You can talk to my friends about anything EXCEPT for my teeny tiny baby tushie.”

Mom? I have become you.

Posted in won't somebody please think of the children

Dumples, offering to retrieve a fallen jigsaw puzzle piece from under the table: “I’ll get it because I’m the littlest!”

“Thanks!” I told her. “I would have a tough time getting under the table because I’m a big lady.” 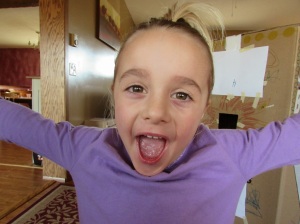 Tagged she has a limited vocabulary, things my four-year-old says, zing

At the dinner table, Dumples is without her favorite condiment. She says to her father, “Could I please have some more ketchup, Your Majesty?”

“Excuse me,” I interjected. “Did you just call him Your Majesty?” She nods. “So what does that make me?”

Without missing a beat, my favorite four-year-old replies, “You’re The Boss.”

Can’t argue with that logic.

Ketchup makes the rounds and Chicken tells a story from first grade land. A classmate is moving away. “She had to move,” Chicken tells us, jabbing her fork in the air for emphasis.

“Do you know where she moved?” Your Majesty asked.

“Ummm. Yeah. She moved to Mexico,” Chicken replied, almost stabbing herself in the face with her fork.

“Mexico?!?” I said. “Really? Why did she move to Mexico?” Because when you live in Minnesota and you’re fleeing the country, you go to Canada. It’s right there.

Chicken shrugged and applied six-going-on-seven-year-old logic. “Probably there were no houses to buy in Minnesota.”

Dumples and I are attending a parent-child class every Monday night in March. She receives undivided attention from me while she does (mostly) the same stuff she does at home — paints, builds, puzzles, asks a lot of questions, sings, points at other kids who are doing interesting things, etc.

The last fifteen minutes of the class is separation time. That means she eats Scooby Snacks while the grown-ups go into another room and talk about love, logic, and chore charts.

I came to collect her afterward. We were the last to leave, and her teacher said, “Did you tell your Mom what kind of cookie you want her to make you?”

Apparently, the snack time convo fell under the topic of “What’s your favorite kind of cookie?” and the teacher’s answer of “monster cookie” was making Dumples drool.

The teacher told me, “I guess you’ll be making monster cookies now.”

We walked out the door but not out of earshot when Dumples announced, “I know you won’t make monster cookies, Mom. Because you can’t cook!”

I heard the giggles behind me. But it’s true. The Boss can’t cook. Your Majesty is in charge of the monster cookies, the ketchup allotments, eye injuries, and any plans for our future exile. In other words, he’s King of the Castle.

Posted in cooking screw-ups, won't somebody please think of the children

Tagged chicken and dumples, formerly known as flathead, no houses in tuscany, obligatory seinfeld reference, starring your majesty and the boss

Strangest Thing Said to Me by a Grown-Up Today

“I know it’s liberals who are known for being whiny and wanting everything to be fair and equal, but you know, sometimes conservatives can be assholes, too.”

Posted in other peoples' screw-ups

Tagged on the phone, sometimes conservatives are assholes, there is no context

A lot of things have changed since I was in elementary school. My Chicken is teaching me all kinds of new things.

The first thing she is teaching me is bus music. We didn’t have bus music when I was a kid. The combustible engine hadn’t been invented yet. And neither had the wheel. Or at least, the bus drivers were these super strict old ladies who stopped the bus and started screaming at us in Southern accents that we needed to “quit it” whatever “it” was or the bus would not be taking us home that day. That was the melody of our bus rides.

I know what you’re thinking. You’re imagining a gaggle of kids in harmony, striking up tunes like, “The Wheels on the Bus,” or — more risque — “Hail to the Bus Driver.”

We made a list of her favorite bus songs and youtubed them.

We even made a CD of bus songs so we could listen to bus songs in the car. (The fact that I am still burning CDs may have proven my senior status.)

I did not teach them to pose like that.

A few days go by and my Chickadee thinks I’m some kind of miracle worker who can youtube any song she has on her mind. She asks me if I can find the name of a song she has stuck in her head. I say, sure. (I’m kind of a big deal.) (That’s the slogan of the zoo crew on the Bus station, BIG 98.7 FM.)

Here’s what we know: It’s not Roxette, which, in my realm is the only good NA NA song.

Posted in won't somebody please think of the children